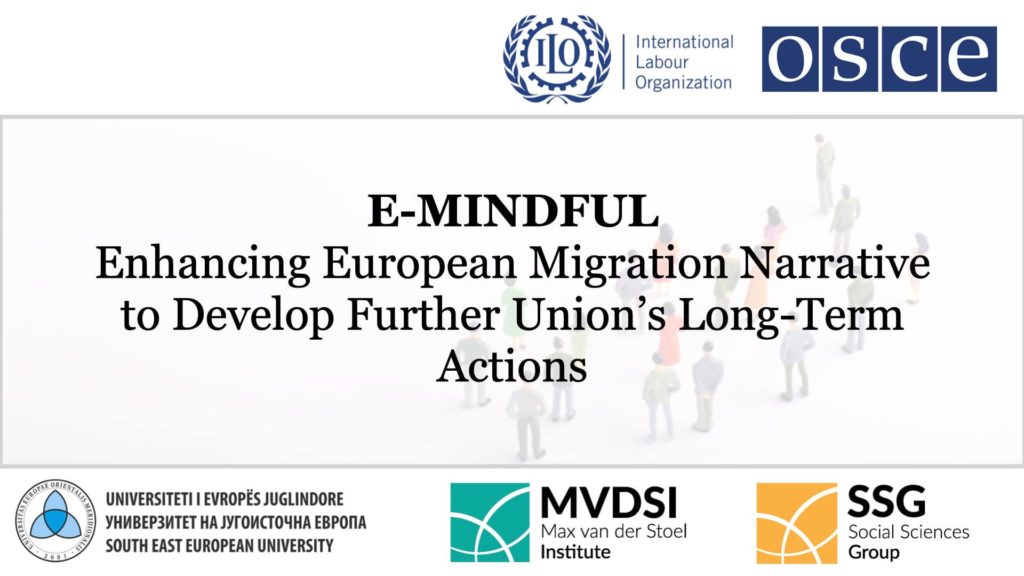 Two new projects enrich the project portfolio of the Max van der Stoel Institute for 2021
The Max van der Stoel Institute (MVDSI) proudly announces two newly awarded research projects while increasing the South East European University (SEEU) project portfolio for 2021 https://mvdsi.seeu.edu.mk/projects/.
One of the awarded projects titled E-MINDFUL is dealing with research and media production of innovative prototypes of awareness raising of the positive socio economic contribution of migrants to hosting societies. The project is funded by the International Labor Organization (ILO) and OSCE encompassing countries in the EU and in the Western Balkans. While the project proposal was managed by the Project Coordination Unit led by Mr. Afrim Tresi, established under MVDSI, its researcher team is composed in a way that brings interdisciplinarity by involving academic staff from the Faculty of Languages Culture and Communication (LCC) and Faculty of Contemporary Social Sciences (CSS).
Second awarded project titled “University digital learning coaches for learners at risk – (UNDILECO)” is Erasmus+ project in partnership with our partner universities from Spain, Germany and Slovenia. The project aims to train members of at-risk groups, such as children from poor families, minority groups like Roma, refugee families, and other vulnerable groups in society in order to equip them with digital skills while fostering inclusion. This project is expected to generate digital coaches from SEEU staff who will provide training for trainers for civil society members with an aim to enlarge the community of trainers who will reach out to vulnerable groups.
The news can be found in the link: https://bit.ly/3yR6d7o

Erasmus+ MUST training held in Lisbon